Japanese Knotweed is a big problem in the Tondu and Aberkenfig area.
Back in the nineteenth century, when Victorian engineers were designing the latest in transport technology, Japanese knotweed sounded like a very clever idea. A plant that typically colonised volcanoes in Japan was imported to Britain to help hide, or possibly even stabilise, railway embankments.
Easy to recognise with its dense thickets of green, purple-speckled, bamboo-like stems up to three metres tall, heart or shield-shaped leaves and alternate leafing pattern along stems. It has completely hollow stems that can be snapped easily with tiny creamy white flowers August to October.
Since Victorian times its spread has caused much unhappiness as it can crack tarmac, block drains, undermine foundations and invade homes and its presence can be enough to cut a property’s value by up to 20%, or prevent a mortgage lender approving a loan.
Trying to destroy Japanese knotweed by yourself is virtually impossible, because the roots, or rhizomes, spread rapidly underground, and can regenerate from tiny amounts of material. In fact it can grow at the rate of 10cm a day during the summer.
Removing this nasty invader is costly, as it must be done by a registered Company:
Do not try to dig it up: Tiny root fragments can regenerate into another plant.
If you cut down the branches, dispose of them on-site. Compost separately, preferably on plastic sheets.
Do not take it to your local council dump. It needs specialist waste management.
Do not dispose of it in the countryside. This is against the law
Do not spread the soil. Earth within seven horizontal metres of a plant can be contaminated.
Take advice from the Invasive Non-Native Specialists Association (INNSA) or the Property Care Association (PCA) on local removal contractors. 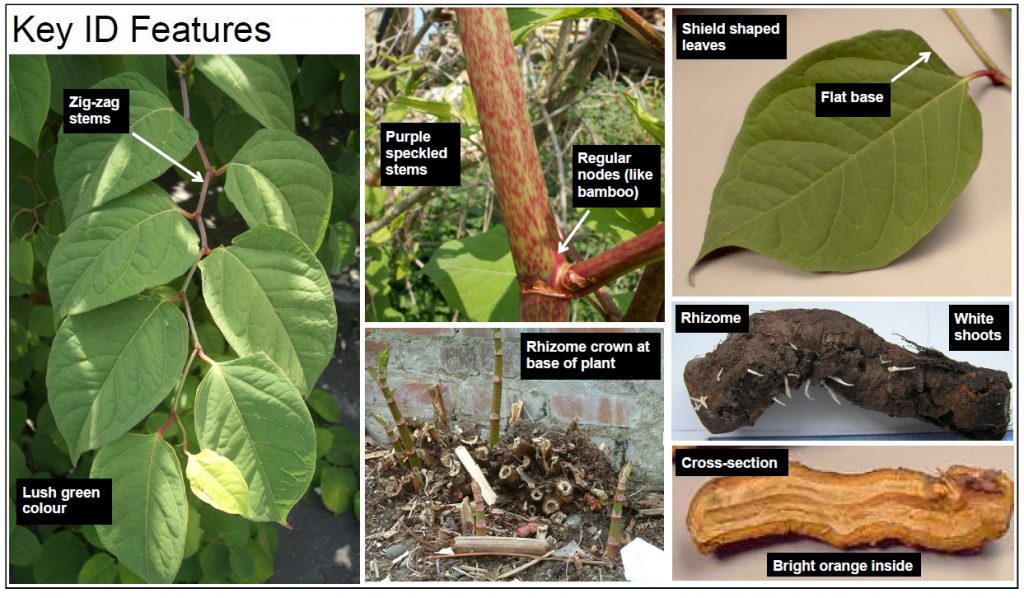 Here is a link to the Bridgend Council website with information on this invasive species:
https://www.bridgend.gov.uk/residents/recycling-waste-and-environment/environment/japanese-knotweed/

Himalayan balsam has dense foliage which crowds out native plants and once established it can grow up to 10ft in height, and during spring and summer it can take over whole areas of river and canal banks. When it dies back it leaves banks bare having crowded out native species. With no roots left to strengthen the bank, the bank becomes more susceptible to erosion and crumbles into the water. 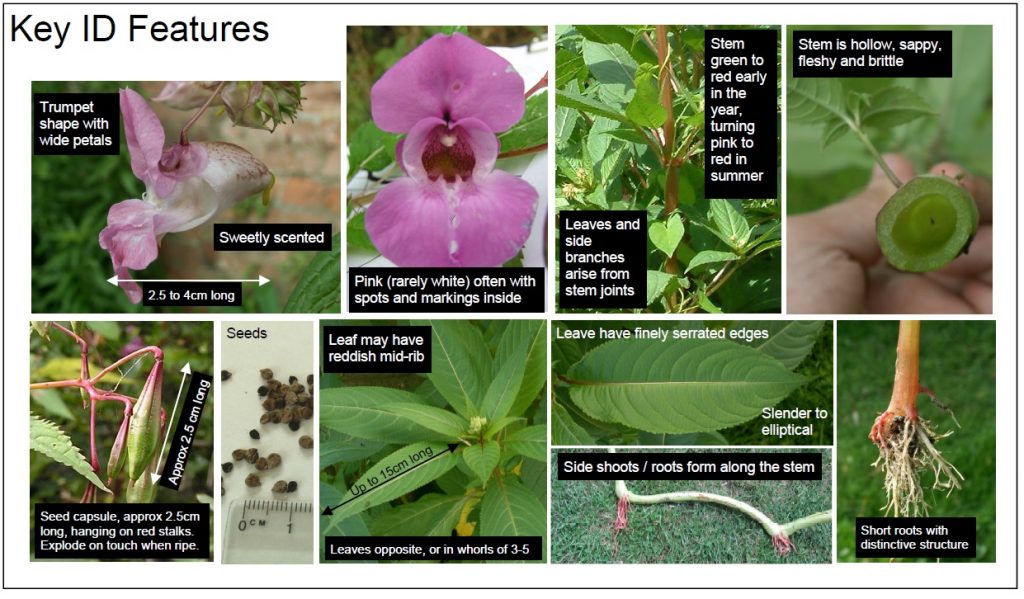 This pretty pink plant was first introduced to Britain as an ornamental in 1839, but soon found its way out of gardens and into the countryside, where it has been spreading rapidly ever since. Until now it has largely stuck to waterways,  but increasingly it is moving into verges and hedgerows where it has a greater chance of spreading because of walkers and traffic.
According to the Royal Horticultural Society each plant can produce 800 seeds a year and their explosive pods can shoot seeds up to 22ft (7m) away, which then stick to shoes and car tyres. Bees are also attracted to the flowers and can spread the seeds widely.
It’s an annual plant so if you snap the plant and just leave it in a pile it will die off quickly before it can seed.